I just returned from my best friend’s wedding and I can’t help myself…I have to brag about how fantastic it was. The wedding details were amazing.

I kinda thought Amy {the bride} was a little coo-coo when she made me buy my bridesmaid dress over a year before the wedding date. But coo-coo she was not. More like brilliant is what she was.

Seriously, this was one of the most creative weddings I have ever been a part of. I wish I would have taken more pictures of the decor. 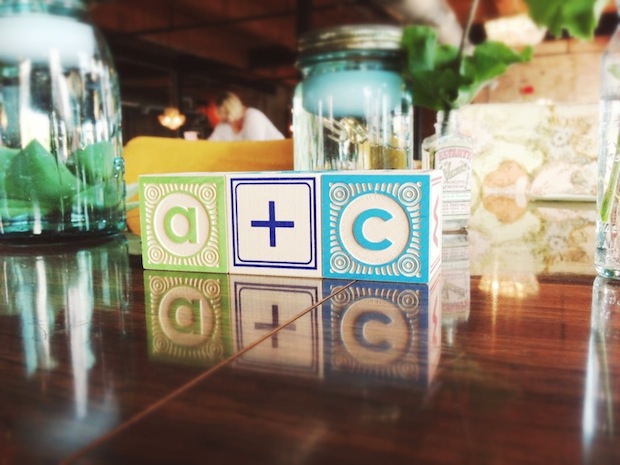 And then imagine being the matron-of-honor and taking your 3 crazy children to the wedding. That was not so brilliant. And this picture pretty much sums up how that went down. Lucky for me I have a fantastic hubby and a sweet little cousin who came along to help. The boys actually behaved themselves through the entire wedding and reception. It was nothing short of a miracle.

I won’t get in to how they behaved in the hotel room.

Let’s just all agree that hotel rooms + kids = not fantastic. If you recall, I was mildly freaking out about giving my speech at the reception.

I started thinking about the last time I gave a speech and it was in college. Yes, college. I wish I could say that was just last year for me, but if we are getting honest…that was 10+ years ago. So, like any normal type A matron-of-honor I practiced in front of my web cam for a good 2 days straight.

I had this huge fear that I would get on stage and my brain would just go blank.

Plus, I was sharing my matron-of-honor duties with another girl, Melissa, and her real life job is speaking in court rooms everyday. So I just knew she was gonna kill it and I was gonna screw up bad. But, I made it through and I didn’t even need my note cards. I attribute it to a couple things:

2. I had my husband pray over me immediately before I went up to give my speech.

Those two things were the key ingredients. Ha! Otherwise, I might have had to borrow the bride’s finger gun.

We ended our speeches with the Harlem Shake. Long story. But just check out this video…yea…that’s what happened the last time the bride came down to the Rose household.

That donkey head made an appearance at the reception too.

If you knew the whole story then you would see why the Harlem Shake made total sense. It was such a great time to catch up with old college friends who were there.

Sometimes you wonder if you will still have things in common, but we all just picked up right where we left off and it was a great reminder of the true friendships that college brings. The boys clearly didn’t make it to the end. But, man they tried hard. P & Bents passed out on the couch by the dance floor mid-dance. SJ on the other hand, he stayed up till 1:00 am.

I’m pretty sure he was one of the last people on the dance floor. I imagine he was all rested up from playing on my friend Jen’s iPhone during dinner {this is the same Jen that made the adorable bridesmaid gifts for me}. Thank goodness she had some great toddler apps because daddy forgot the iPads back in the hotel room.

We decided that the boys needed to see some of the city so we ventured out down Michigan Avenue and then took them to Navy Pier. Some of us were fans of the gigantic ferris wheel while others of us were not. Not naming any names. We could not be more happy for Amy and Chris! So thankful that we got to be a part of their big day.