Get my FREE Guide "The Imperfect Perfect You"
I have become a reality tv slut! Yikes, I know, slut is harsh, but seriously….I watch so much reality tv it is disgusting. As if my last posts on The Bachelor weren’t enough to satisfy your reality tv fill….I am now on to American Idol! Can I just say that I have been anticipating the season premiere for MONTHS!
When I heard Idol was adding a fourth judge, I was TOTALLY against it! But, I must say that I kind of liked the newest addition to the judging panel….Ms. Kara Dioguardi. Although, I am a little confused on how many votes it takes to get through to Hollywood???? Last night as long as 2 judges said YES…then the contestant were put through to Hollywood. It kind of makes me wonder what the point of the 4th judge is. But, then I also wonder what the h*** they would do if there was a tie.
I think my favorite of the night was Deanna Brown’s rendition of “Sittin’ on The Dock of the Bay”…she can go directly to the finals….without wearing a bikini, without making out with Ryan Seacrest and without collecting $200. It seemed that the producers may have laid off their obsession of “making fun of the emotionally unstable contestant.” And if you ask my husband, who watches in his sweatshirt with his hood up (so he can pull it over his face when someone does terrible), he would be okay with that. Just look…. 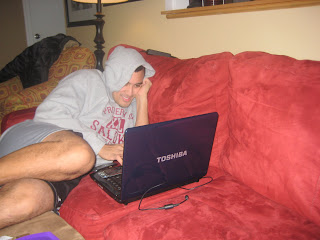 He does this with every show we watch. Whether it be a hood of a sweatshirt, a pillow. or a blanket…he has to cover his face when there is any type of confrontation or terrible performances on tv. I know it looks like he is just blogging, but he was truly watching…until someone would come on and sing as if they were really not singing, but possibly passing a kidney stone. I am sure this says something about his personality….I just don’t know exactly what.

Hey FOX, it’s a good thing dogs don’t have an opinion. If I had to guess, I would say that Klay Klay was thoroughly NOT impressed. It could have been the first audition, you know, the Michael Jackson guy. BUHbye! 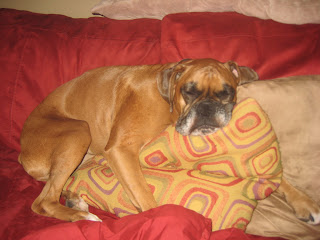 Guess what I did after Idol was over….watched The Real Housewives of Orange County. Uh huh, never-ending reality tv ladies and gentlemen.