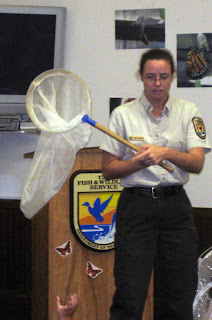 P-Man went on his very first field trip this week. He is in a class called “baby talk” offered by Williamson County Early Childhood Development. We just learned about this class over the summer and I was so excited to start getting him involved in some interaction with other kids. Since he doesn’t go to daycare (because I am SUPER lucky and gigi and papa watch him everyday) I thought it would be good to socialize him a little. So far so good. The baby talk class took a field trip to the Crab Orchard Refuge this week to “catch butterfly’s”. Gigi and P-Man tried hard to catch some butterfly’s, but being the fact that the net weighed just as much as P, it was a hard task to accomplish. Alot of the other kids (a little older than P) caught butterfly’s and even though P didn’t…he seemed to have a good time walking around in the field. What a cute field trip! I suspect next year he will be able to really participate and catch lots of butterfly’s. I also suspect next year, if I don’t get his wildness tamed, he could be chasing the other kids with the net!

Here is P and Gigi as they spot their first butterfly…. 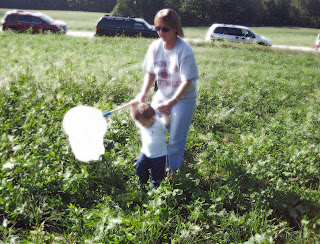 Gigi is trying to show P how to use the net…”gently”. haha! Yea, P + huge net doesn’t = gentle.
P + huge net = dangerous! Doesn’t he look determined in this picture? 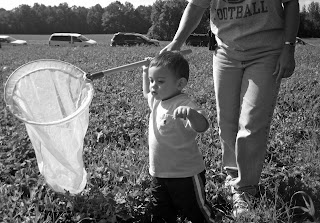 Here I come butterfly’s….watch out..I’m dangerous with this net! Gigi said gentle, but gentle is not in my vocabulary quite yet. 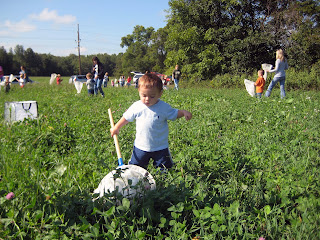 Here they are looking at some of the butterfly’s the other kids caught. At one point, P fell on the little tent and I thought for sure he had murdered all the butterfly’s inside…luckily…they all seemed to still be flying around. Phewww! The refuge lady seemed to take these Monarch butterfly’s very serious. 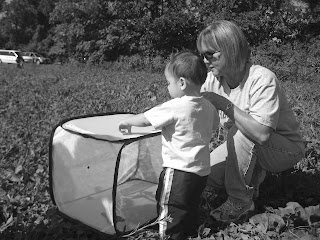 I know I seem to write TONS of stories on how crazy and wild my P is…but he really can be sweet and adorable! I love the age he is at right now. Everything he sees is something new for him to explore. It’s so fun to watch him take it all in.