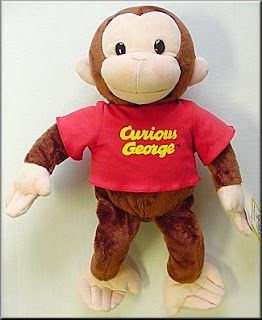 Every child has something they grow attached to. When I was little, I had a “wooby” (a baby blanket) that I carried everywhere. Heck, I still had it in college. I would even sleep with it when I moved in with Jeff. Yikes! Should I really be admitting that?

My parent’s tell me that they took it away from me when I was 5 or so and a couple years later I asked where it was so that I could use it for my babydolls. Apparently I was a sneaky child, because as soon as I learned where they hid it…it was mine again for good! My so-called “babydolls” were a good excuse to get my wooby back! Man, I was manipulative. Or just smart.

Well, I am sure you have heard me talk about P’s CG. CG is to P as wooby was to me…the one thing in his life he doesn’t go anywhere without! CG was a gift from J’s best friend Steve when he came to visit us last year from CA. I never thought P would grow so attached to this silly doll, but he carry’s it around by it’s red shirt everywhere. He has given it sooo many kisses that it’s tan nose is now turning the color of dirt. We have decided this week that we really need to find a back up CG. I can only imagine what would ever happen if CG went missing. What a nightmare that would be! I think I will get papa on a mission to search for a CG backup.

If you are wondering if I still sleep with my wooby…NO…I finally gave it up when I got married. Yes, it took me that long and I still do have it, but I have packed it away in a box. I guess J took the place of wooby! I knew he was good for something. haha!