Get my FREE Guide "The Imperfect Perfect You"
Since it’s Veteran’s Day I thought it was an appropriate time to talk about the hubby’s 15 month stay in Iraq and THANK HIM for fighting for our freedom! He served 9 years in the Army National Guard and was deployed to Baghdad for almost a year and a half in 2005/2006. As most of you know, he is a CFP and was what most call a “weekend warrior”, meaning that he drilled once a month, but besides that, was a business man the rest of the time. Even though he has been back now for 2 years, I think it is important for him, and all the soldiers who have served or are serving, to know that we appreciate them!
This picture sums up how we felt being away from eachother for so long! 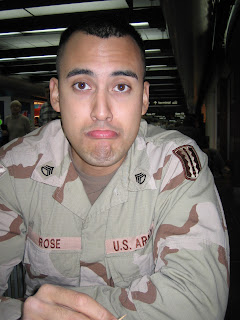 J & I had just gotten married Nov. 2004, and he was deployed Jan. 2005. It’s hard to believe that we ever went through such a horrible time. I can remember the countless nights that I didn’t sleep, being GLUED to the news like it was my job, sitting by the phone waiting for his call, praying numerous times a day for his safety, and wondering…would God bring him home in one piece? It was such a trying time in my life and, I have to admit, the hardest thing I have had to go through so far. I often ask myself, did he really live in Baghdad for that long? I wouldn’t survive in Baghdad for 48 hours, let alone 64 weeks! I am so proud of him for what he did for our country and I think P will be proud to know that his daddy is a true hero!
Thank you to all the soldiers and their wives, moms, dads, sisters, brothers, kids and anyone else who may be experiencing what J & I did. You will get through it! And we APPRECIATE your service!

I took this picture at the California Pizza Kitchen the day I picked him up from the airport for his 2 week leave. We hadn’t seen in eachother in ELEVEN months! I think he deserved the beer! 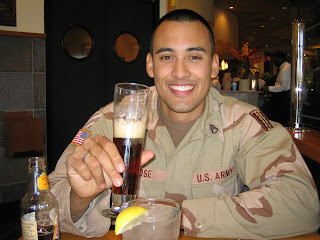 You should check out my hubby’s daddy blog, Financial Dad, or his business blog, Good Financial Cents. I am just glad he is blogging from the U.S. and not a foreign country!