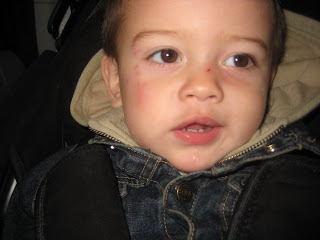 This morning was a typical Sunday morning for the Rose Family. Rushing around trying to get breakfast and coffee under our belts before we headed out the door to church. We actually made it on time…dropped off P in the toddler room and off to sing and worship! Little did I know that while J & I were singing away, P was getting his butt kicked!

As soon as church dismissed we headed to pick up our little man from the “big boy” room. This is only his 3rd or 4th time in the actual toddler room instead of the nursery. He’s been doing fine with it though….well….until today. As soon as we walk up, what do we see?…….see for yourself (picture above and picture does not show all his wounds). Our poor P man had a scratch on his nose so deep it was bleeding and 4 to 5 scratches near his eyes and down his face. He looked like he could have been malled by a small animal. And ofcourse, as a mommy, I was so flustered! When I ask if he had gotten in a fight….they responded with “oh, I don’t know. I didn’t even notice he had something red on his face.”

Didn’t even notice???? Something red? Yea, that something red is called BLOOD! Even someone half blind would notice the scratches all over his face. I was ready to jump over the gate and kick some little 2 year olds butt! Being the fact that the nursery workers didn’t even know it had happened, I obviously didn’t know which small toddler to target! How am I ever going to drop him off in the toddler room again without worrying the whole church service that some little guy (or girl for that matter) is bullying my P! I am sure all you daycare moms out there know exactly how I am feeling. Is this normal? Do your kids come home with all kinds of bruises and battle wounds? When I think about it, what makes me the most upset is that the babysitters didn’t even address it or know that it had happened. It wasn’t like some kid scratched his face with an overgrown fingernail in one slap. I mean, this “kid” must have gone after P a few different times…and no one was even watching!

I am not ruling out that P could be to blame. Trust me, I know how rotten he can be. But, still, someone should have had a closer eye on my baby!