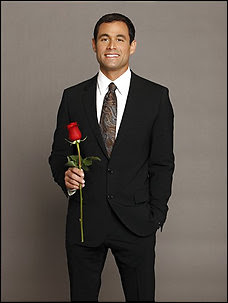 My FAVORITE show of the season has started…The Bachelor (who’s with me?)…and I’m all about predicting the lady who ends up with the final rose. I started doing this the season of Shane & Matt…and low and behold…from day 1…I predicted it correct! Besides the fact that Shane was wearing my favorite watch, one that I might possible donate my left kidney for, I picked her because of her fingernails. Yep, that’s right, I could tell by her fingernails that she was the one Matt proposed too.

At the end of the show they always scroll to a scene of the man proposing and they always show the girls fingers! Actuallly, tonight they gave 2 clues: 1. fingernails AND 2. haircolor. When they panned out, you could tell that Jason was standing with a brunette! So, of course, I am sitting on the couch (as hubby’s blogging from the laptop) and I precede to rewind my DVR to the very beginning of the show so I can inspect every brunette girls fingernails. Yes, it’s a little excessive. Ok, A LOT excessive! But, it’s so much fun! Hubby clearly made fun of me every time I was like “Oh…it’s HER! Wait, NO…she has feak nails too. Maybe it’s HER!” (Although I did catch him peaking over the computer a few times to check out their nails…or wait…maybe it wasn’t their nails he was checking out. Hmmmm.)
Anyway, I have my prediction for who Jason proposed to!! I think it is SHANNON, the 29 year old brunette dental hygienist (with feak nails) from Marshall, MO. I could be TOTALLY wrong and I may even change my mind next week…but for now…I think he picks her. Anyone else watch twice just to see which girls fingernails look like the fingernails he puts the diamond ring on? Or do you all have better things to do than spend 4 hours on the couch analyzing a reality tv show? Am I making myself sound pathetic?
Now don’t be calling me for any psychic readings…I’m not that good and I don’t have a magic crystal ball. But, going on my track record, I would call it more than luck!
And If you didn’t catch last nights episode (Nin), be prepared….DEANNA IS BACK! She comes to tell Jason she made a huge mistake (with Jesse) and that he still has a chance with her. WTF? I hated her then, and I hate her even more now. Luckily she doesn’t have feak nails so I am pretty sure he didn’t fall for it.