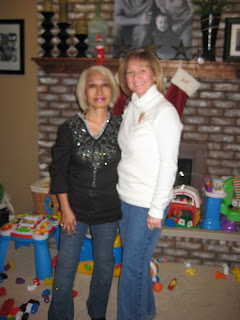 I have been dying to blog about this story for a few days now, but haven’t had the chance. So finally…I have a few minutes to tell you just exactly what my two mother’s have been up to lately. As you know, J’s ma is here from Las Vegas (she actually just left last night, but has been here for 2 weeks). Her and my ma get along very well! (Sorry the pic is blurry, it’s all I got and I had to give a visual of these two trouble makers…ignore the million toys all over the floor.)

Last Wednesday night my husband and I had a Christmas party to attend. My two mom’s decided they were gonna have a little party of their own with some of my mom #1’s (my real moms) girlfriends. Papa was nice enough to watch the P while we attended our party and the moms attended their “party”.

So…mom #1 and mom #2 and the “girls” (as we’ll call them) all decided to do dinner and margarita’s at a local mexican restaurant, Don Sol. It wasn’t two seconds after Mom #2 (J’s ma) took a bite of her seafood that she ran to the bathroom and started throwing up. She actually did this 3 more times in the course of the next 30 minutes. Ofcourse, she was convinced that she ate something that made her sick. Seems logical. She wasn’t sick before she showed up.

So mom #2 decided to ask the manager a few questions about their seafood…one question being “Is the seafood fresh?” The manager said yes and then she proceeds to ask if she can see it. Yes, she asked if she could go in the kitchen and see the fresh seafood???? Clever, huh, but that may be phillipino style because I don’t know of any manager that would allow you to go inspect the food in the kitchen….and this one was no exception. After the numerous trips to the bathroom to get sick, mom #1 asked the manager to take half of the dinner of her bill. Keep in mind, any normal manager would have already comp’d the entire table and been apologizing like crazy. Not so much with this manager. He actually responded in a very snoody voice and said “no, why would I take the dinner off your bill? How do I know you weren’t sick before you got here?”

Apparently, from what I’ve been told, this is where the night got ugly. And I must agree, as much as I don’t like drama, I am siding with the mom’s on this one. What manager would say that? Especially after a customer just puked 3 times in your bathroom! Long story short, he refused to refund her for the meal and was laughing at her when she was running to the bathroom to puke. Mom #1 tried to get his picture (since he was reluctant to give his name), but had no luck. He held his hand towel up in front of her camera. I can only imagine my 2 four foot eleven mothers trying to take snapshots of the manager as he is holding a towel over his face. God, I am sooo glad I was not in attendance.

Anyway, the manager told them they were barred from ever coming back to the restaurant!!! Can you believe the nerve of this guy?