Just about every time I turn around P is falling into something or bumping his head! He is a walking target to EVERYTHING! I can remember when he got his first big bruise on his cheek and I was soooo upset. I hated that it looked like I smacked my child upside the head with a rock when, in reality, he had fallen into the closet door. I think he walked around with that stupid bruise on is cheek for a good THREE weeks. I can just imagine what other parent’s were thinking of me when they saw his face! I mean, I know what I use to think of children that I would see covered in bruises. I remember many times thinking ‘how terrible, that little kid is probably in an abusive home’.

But boy did I have ALOT to learn about baby boys and bruises. Ever since that first bruise…I can not even count the number of bruises he has had. It’s probably in the 40’s atleast. It seems like everyday there is a new one surfacing somewhere on my lil guy (AND NO I’M NOT BEATING HIM). Most of them don’t seem to phase him. I have 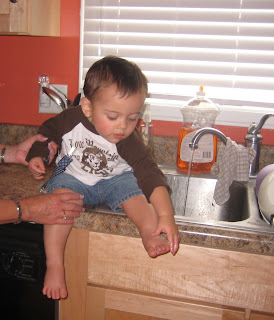 Over the weekend he fell into one of our standing shelves in the living room (this was the day after he had fallen down the stairs at a friends house) and somehow he got his right cheek pretty good and he took all the skin of his pinky toe. Bruises are much easier for me to deal with then blood. I’m not going to pretend I do well with blood….because…I HATE blood. So the second I see him bleeding I FREAK out. Luckily it was just his littly pinky toe and once we ran it under the cold water it wasn’t as bad as I was making it out to be.

Here we are cleaning his ouchie in the sink. I put the bandade on and he HATED it. He kept pointing to his toe saying “uhh uhh” (his new communication tactic)…it wasn’t 15 minutes and he figured out how to get the bandade off! And can you see how red his cheek is? That ended in a nice black and blue line down his cheek.

Let’s just say, when I see a kid with a bruise now…I don’t instantly think their parent’s are beating them! I realize that bruises are part of being a toddler! I’m sure P has MANY MANY MANY more to come!