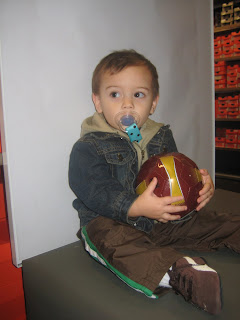 J & I are HUGE shoppers; however, we usually don’t battle the BLACK FRIDAY crowds. I say “usually”…because this year we made an exception…and went to see what it was all about. I can’t say we got much shopping accomplished. We purchased a few Christmas presents and called it a day. P got a new pair of kicks. Puma kicks that is. He looks like such a lil man in them.

Then Saturday, on our way home, we stopped at the outlet mall and took him to the Nike store. He found a ball that he fell in love with. He liked it sooo much, he snatched it up, ran to the back of the store, found a bench, climbed up, and sat and held on to that ball for dear life. We were NOT leaving the store without that ball in tow. I, ofcourse, HAD to get it for him since he loved it so much (even though the checkout line was 30 deep). I told myself that the shoes and the ball would be Christmas presents. It’s a good excuse, but really not a likely plan. He looked so cute in the shoes that I had to go ahead and let him wear them. And the ball….he was having so much fun with it I couldn’t take it away from him. Plus, he’s 16 months…don’t you think I can let him play with it up until Christmas, then wrap it and he’ll never know the difference? That’s my logic. Right or wrong…I’m not sure. I am pretty sure that P thinks it’s Christmas everyday! I must admit, he’s a good lil guy and deserves some new toys every now and then! 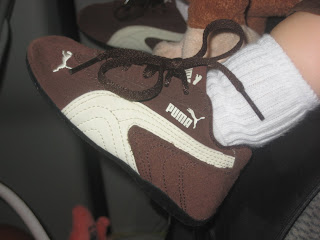