Get my FREE Guide "The Imperfect Perfect You"
My mom, dad, auntie N, kiks, frosty, izzy, J, P and I all headed to Bandy’s for our annual family trip to the pumpkin patch! We are going to start making this a tradition. P LOVED the pumpkins! I was worried that it may be somewhat boring for him since he’s still a little young, but boy was I wrong, he had more fun than any of us! You would have thought me, N, and Gigi were the paparazzi or something with as many pictures as we were all snapping. This is pretty typical of the three of us when we are hanging with the P. What’s even funnier…is we all 3 have the exact same camera. I’m guessing we took over 200+ pictures. It was a little out of control, but such great scenery for a photo shoot!
As soon as we got there P found a pumpkin that was just his size! 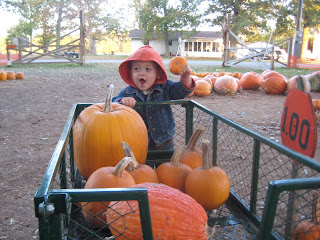 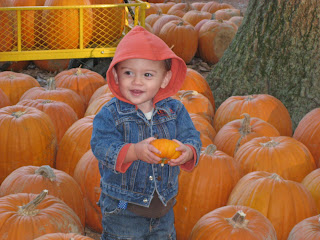 He dropped it between the big ones…but was determined to find it! 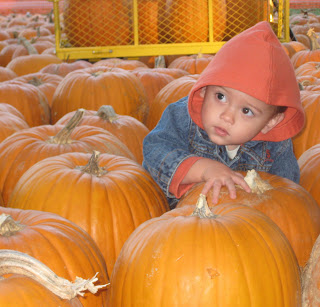 He must have just been enjoying the experience. Taking a break and leaning on some pumpkins. 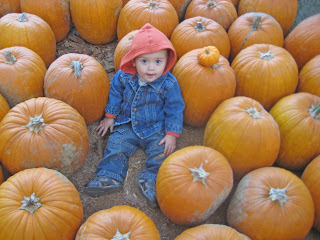 Then it was time for a wagon ride while everyone else picked out their pumpkins. 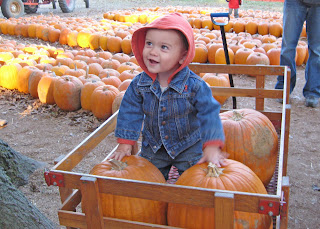 That didn’t last too long before he was back out helping Auntie pick just the right pumpkin. 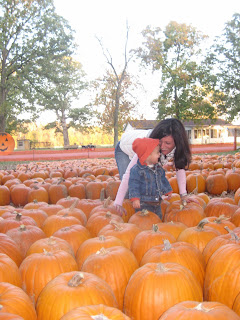 He loved the fact that he could throw the hay and not get in trouble. I have been trying to teach him NOT to throw things…so this was going against mommies rules, but I let it slide since he was having so much fun. 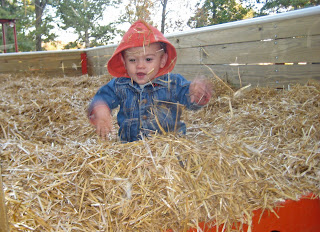 It’s pretty rare that there is ever a picture of the 5 of us. Too bad P wasn’t looking. He was too distracted by the hay. We are planning to carve our pumpkins sometime this weekend (J’s favorite part…wink wink). 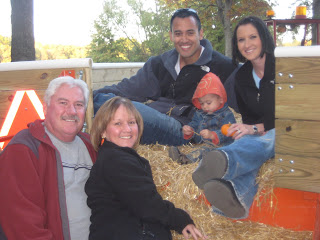 It was ‘bye-bye’ to the pumpkin patch for this year. Frosty wheeled P to the car with all the pumpkins. I wish you could see this pic closer because he had his arm around the pumpkin. awww! What you can’t see is that as soon as we let him out of the wagon…he tried to dash back to the pumpkin farm! I guess it’s save to say we all had a great time! 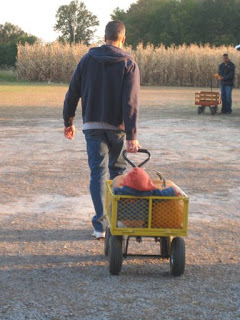