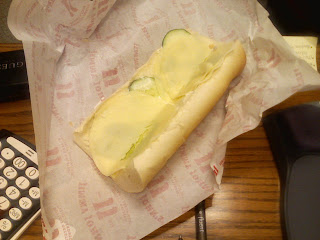 SERIOUSLY…so it was 2:00 pm today and I hadn’t eaten lunch. Instead of stopping to grab something on my way from Herrin Hospital to Corp. (like a smart person) I figured I would just order, my fav, good ole Jimmy John’s and have it delivered to Corp. After all Jimmy Johns slogan is “Subs so fast you’ll freak” so even though I was STARVING…I knew that they would be quick with delivery.

Apparently, they were so quick they forgot to finish making my sandwich. I ordered a Turkey Tom no sprouts. To my surprise when I opended up my sandwich it was cheese and cucumbers. That’s right…nothing else…just cheese and cucumbers??????? I immediately picked up my phone (after I announced to my whole office that my sandwich had cheese and cucumbers and no meat) and called Jimmy Johns. Ofcourse, the guy who answered put me right through to the manager. In my head I was thinking “oh good, the manager will take care of this no problem”. Apparently Jimmy Johns needs to stop spending so much time on training their staff to deliver subs “so fast you’ll freak” and work on training their managers customer service skills. I politely told the manager what happened and his response was “NO, no, no”. At first I thought yea, I know, no way! But, after a few seconds of silence he says “no that’s not possible, I make all the sandwich’s”. WOW, so this guy thought I was LYING about a dumb sandwich! I told him he could come look at the sandwich sitting on my desk and again, in his ‘not so nice’ tone, he says “how do I know you didn’t just throw the meat away?” I’m like…is this guys serious? I am starving, it’s 2 hours past a person’s normal lunch hour, but I’m LYING about receiving my sandwich with no meat. Or not only that, I actually received it with the meat, but threw it away and then called to complain! Likely.

Finally, he agreed to send me out a new sandwich, even though he still thought I was lying. Bizarre. As I sat and waited for me new “spit-infested” sandwich my co-worker’s and I contemplated whether I should really eat it or not. If I hadn’t been so hungry I was about to eat my left arm, I might have just thrown it out. But, after a full inspection, and no signs of spit or bugers (to the visible eye) I decided to just eat it. Well, I took about 3 bites and couldn’t stomach it anymore. I had to throw the rest away. So much for that Jimmy John’s experience.

And man…I am still ticked that some Jimmy Johns manager would think I would be lying about something as dumb as a $5 turkey sandwich.