First, I just want to give some big blog HUGS to hubby for writing that very sweet post about my P.K. Cancer is evil. I know that P.K. has battled this disease and, so far won, but it looks like that may no longer be true. We all love him very much and pray that he is not in pain.

Second, my GIVEAWAY is about to end! If you have not entered yet you still have time! It will end Wednesday evening and hopefully I can announce the winner on Thursday.
Third, The Bachelor episode 5 (I hope you didn’t think I would leave you hanging)…
I have to admit, since all three crazies were kicked off the show last week I wondered what the show would have in store for future episodes. I mean, every single Bachelor show in history has had DRAMA and NUT JOBS…but these five ladies that were left…seemed to be somewhat “normal”. How fun is that? But, somehow, even normal ladies can be interesting because I enjoyed last nights show just as much as any other. And honestly, sometimes it’s nice to see women acting classy.
It was a big trip to Jason’s hometown of Seattle, where we saw Jason and Ty’s so called house. ??? Come on ABC, are you serious? Last time I checked Jason was not Prince Lorenzo Borghese. He is an account executive…which usually equals some fancy term for entry level sales position. Do you think I really believed that he lived in a million dollar home on the water front that was identical to the Sleepless in Seattle house? Or do you think I am stupid enough to believe that you would actually aire where he truly lived? You do know Shannon (aka Tooth Nazi) would be banging down his door…wait…she probably already knows his real address.
Melissa got the first one-on-one date, which ended up being a date back at the bachelor pad. Once Ty found out that daddy was leaving again, he started acting like “grumpy pants” and Jason immediately called off the night on the town for a night at home. I am still pretty sure ABC set this one up too. Way to go Team Bachelor, playing on all of us with kids…and it totally worked.
Stephanie, Jillian, and Molly got the group date. Yes, Naomi, that means you get the final one on one date. Will you please stop whining now? Jason took the girls to a local radio station for a little PR. The girls had to stay in a sound proof room while Jason answered drilling questions, like “who is the best kisser?” I didn’t know Jason was the type to kiss and tell, but apparently I was wrong. He answered the question by saying Molly was the best kisser. Okay, Melissa, if I were you, I would be in the bathroom puking right now being the fact that he just spent the entire evening making out with you…yet didn’t deem you the best kisser. If that doesn’t suck I don’t know what does.
Naomi had the final one on one with Jason, but honestly, Naomi acts like she is 16. I think she is gorgeous, but immature. And even though they were contstantly playing tonsil hockey the entire date, Naomi opens up to Jason and tells him that her mother abandoned her family when she was younger, but after resenting her mother for years she has now come to terms with it and realizes she is more like her mother than she thought. If this didn’t trigger the: WARNING: COMMITMENT PHOBE! DO NOT PASS GO! DO NOT PASS GO!…I don’t know what would have.
During the rose ceremony, it was Stephanie who was left rose-less. I think this has been a long time coming people. I actually think Stephanie might be one of the nicest people on earth and Jason was trying so desparately for there to be a spark…but there was nothing. She exited the show in the most classiest fashion I have yet to see.
All I want to know is when is…….. 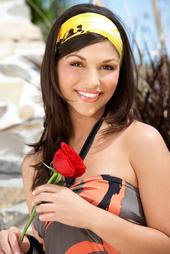 ……………Deanna coming back? I have been waiting for that episode to aire for weeks! That will definitely bring some drama back!