First things first, I have been puking since 6am. I have no idea why. I am just now feeling good enough to open up my lap top and jot down all my thoughts about last night’s episode of The Bachelor. Sorry it’s delayed.

This week was hometown dates. Jason got to meet the family’s of the 4 remaining women.

He started off in Canada where he was introduced to Jillian’s family. Jillian has been one of my favorites ever since the hot dot analogy surfaced in episode 1. However, this week changed my opinion of her a little. She finally opens up to Jason about her mother’s battle with depression. *RED FLAG* If I were Jason I would have been thinking, “hmmm, I wonder if it runs in the family?” I mean, do you want to take the chance of marrying someone who has the potential to be depressed for years? Uh, yikes. That would be a no.

Then it was off to Molly’s hometown in Michigan. There is just something about Molly that I don’t like. Maybe she’s too preppy. She just never seems to get emotional. I saw the most emotion out of her when she claimed “I will NEVER bring someone home that my parent’s don’t LOVE!” Really? Your parent’s have that much control over you? Aren’t your parents suppose to love whatever makes you happy. Maybe I was raised differently. I do, however, like her dad’s advice of “Just remember what I said. If you get in that limo…don’t cry.” This could possible explain why we see no emotion from Molly. Her dad has drilled it in her head since she was probably 3! Although, I think she will need the advice for next week because I definitely see a limo ride in her near future.

After Michigan, Jason headed to California to meet the crazies…I mean Naomi’s family. This might have been the weirdest hometown date in the history of The Bachelor. First, Naomi’s mom had Jason hula hooping…”be one with the hula hoop”. As if that wasn’t weird enough, she busts out that a dove killed itself on her windshield and she kept it in the fridge in a paper bag so they could give it a proper burial. Jason had the honor of doing the eulogy. I could have sworn I was going to see Ashton Kutcher come out of the bushes and scream “You’ve been PUNKED“, but unfortunately, Naomi’s mom was serious. It was not a joke. Oh Naomi, you should have known at that very moment….your chances were over. And then Jason gets cornered by Naomi’s dad Hector who lectured him on his thoughts on JESUS. Now, I love Jesus people, but how inappropriate for her dad to push it down Jason’s throat. And even more funny, because Jason is Jewish. Needless to say, CA was a bust and I am sure Jason could NEVER see himself introducing Ty to these crazy people.

Back in Dallas, Melissa’s parents refused to meet Jason. How supportive of them. They were not comfortable with the “publicness” of it all. Instead he met some of her best friends, who also had never met Melissa’s parents???? Do her parents live in a bubble? How is Jason suppose to propose to someone when he’s never met her family. Having just left Naomi’s wacko parents he was probably wanting to make sure Melissa had normal parents. Unfortunately for Melissa, I think this is going to hinder her chances. Although, I do still think she could get the final rose.

In the end, it was Naomi (thank god) who was left rose-less. The crazy family did it for ya sweetie. If you had any chance of winning Jason’s heart….it was gone the second he met crazy mom, Hector, and the hula hoop clan. Sorry.

NEXT WEEK is the episode I have been waiting all season to see. DEANNA RETURNS!!!!!!!!!! However, here is what I just read: 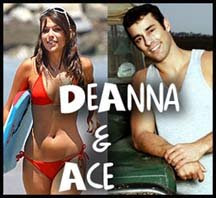 It was all scripted. Deanna doesn’t really want Jason back. She is dating Ace from The Real World. ABC set it all up to add drama to the show. Yea, that sucks, because I really wanted to watch Deanna get HER heart broken when Jason said “see ya!”.