Get my FREE Guide "The Imperfect Perfect You"
When I began to start thinking about Halloween and costumes…I do what I do every year…rack my brain for good costume ideas. And, just like every other year, I usually come up with nothing good. Have you ever been on the halloween cosutme websites? Every year it’s the same thing over and over. So boring! I decided this year I would ask J what we should all be for halloween. Although he didn’t have any good input for the adult costumes he felt like P should dress up as a bear or a bull. Get it…for the Market. Bear Market/Bull Market. He actually preferred he be a bull because the bull market is the “GOOD” market and ofcourse J is always thinking positive (and always thinking in terms of the market…hence his costume ideas…ridiculous).

I looked for an infant bull costume and came up with nothing…so second resort…the bear costume! This costume was much easier to find! I thought it would be fun to try it on P and see how it looked. Well, I didn’t get passed the hood and he was screaming. He hates hats so I should have known he wouldn’t like it, but it was so darn cute I had to atleast try. Here are some pictures of us trying the hood on.

It looks like it could be going well in this picture. Don’t be fooled…this was only a few seconds in…. 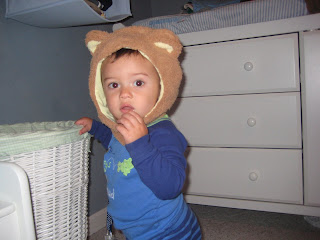 Here’s how he really felt about the dumb hood! 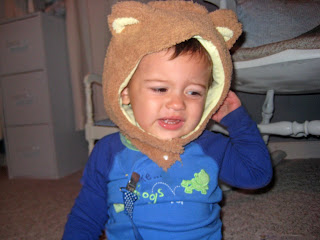 It’s going over well…can’t you tell? Halloween may be interesting. Most likely he’ll be the bear without the bear hood. I counted…he only kept it on for 53 seconds! 🙁 And it wasn’t even a happy 53 seconds so there was no opportunity for a cutesy pic.

Since we are talking about halloween I thought I would post some of our “halloween pasts”. Here is our first halloween together. J was “God’s gift to Women”…how appropriate. It was actually my idea so I was ok with it! haha! I was some army chic. We pulled these costumes out at the last minute. Literally, we were making J’s costume at 6pm the night we were going out. 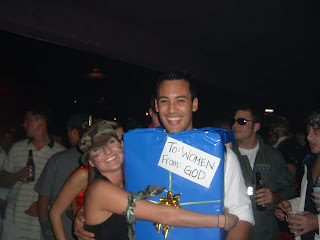 Dorothy and the Tin Man…this was the night J proposed! It was hard to say ‘yes’ and take him serious when he was dressed as a Tin Man…especially with his cheesy “I stole his heart” lines. He’s so romantic! I love this man! Who else could get there man to dress like this? 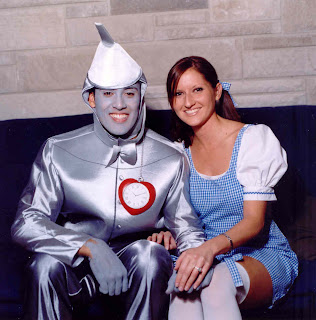 And then it’s Gilligan and Mary Ann. 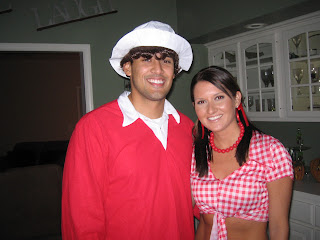 We have had some fun halloween’s! Who knows what’s in store for this year.