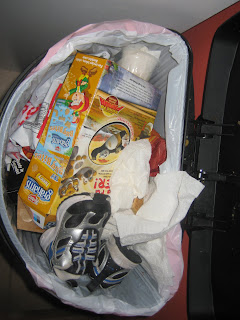 Lately P has been SOOO smart. I know…all parents probably brag on their kids and claim that their kid is the smartest…but really…he is SOOOO smart. 🙂

The smarter he gets the more entertaining he becomes. We find ourselves sitting around just watching his every move. “P, blow kisses. P, wave bye-bye. P, throw the ball. P, pet Klay Klay. P, do circles. P, show us your nose…belly…eyes….ears….brain…tongue…knee (and yes he even knows knee). P, dance. P, give hugs.” and the list goes on and on. But, just in the last week he has really started getting super smart. I can hand him something and tell him to go throw it away and he heads straight to the nearest trash can, lifts the lid, and in it goes. I mean, really, do all 15 month olds do that?
Well, I guess he started liking the “trash” game so much that he even started throwing away things that weren’t trash. I went to the trash can a couple nights ago, opened it up, and guess what I found? P’s nike shoes. Hmmmm…I wonder how those got in the trash can. Not to mention he has thrown CG away TWICE along with the TV remote and his sippy cup! Maybe I shouldn’t have taught him where the trash can was? OOPS!
J and I have come to the realization that we are going to be missing A LOT of things in the next several months. We are already finding ourselves saying “where’d the (fill in the blank) go?” Let’s just hope he doesn’t throw away something important without me noticing. The joys of a toddler!