I guess you could say I have been a “typical” first time mom for the majority of Parker’s first year. I am super protective, over emotional, and ready to take him to the ER the second he bumps his head. I probably shouldn’t feel guilty…I am sure most first time moms can relate and are even more protective than me (maybe not so much but it makes me feel better to pretend).

So you can imagine how alarmed I was when I noticed my son was playing in the street outside with his daddy. Yes, I did say STREET…as in…WHERE CARS DRIVE. We were all outside (me, J, P, and Klay) playing in the front yard. Well, J and I weren’t playing, but P and K were. P loves to be outside. Anytime he is being fussy…remedy…OUTSIDE TIME! He enjoys picking up the rocks and throwing them. Such a typical boy. Well, I ran inside (for 2 seconds) to grab my camera (ofcourse) and when I returned to the front yard…J was chasing P down the street. No lie. And the best part about it was…J thought there was nothing wrong with having a one year old in the street! I actually captured the moment on my way out to rescue him. Daddy’s, they just don’t know! 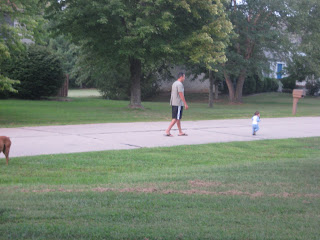 ps to stick up for J some (and only some)…I guess I should add that we do live in a neighborhood where theres not alot of traffic. In fact, not one car drove by the whole time we were outside, but still…not my point. Point = 1 year olds don’t need to be playing in the street. Again, this is where my husband would chime in with “sweetie, calm down”.