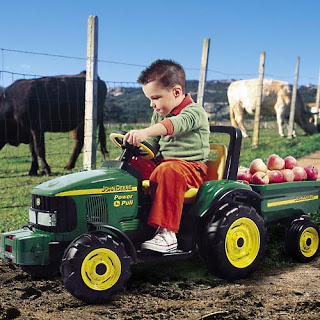 I think it’s pretty clear, from all my posts, that Gigi and Papa SPOIL the P Man rotten!! Papa is a retired Director of Manufacturing and Gigi is a retired (well maybe not retired yet) Domestic Goddess = as she calls herself. They are kind enough to keep the P while J and I work (could we be any luckier?). They love to spoil spoil spoil! Everytime Papa runs to Sams or Walmart (which if you know my dad, is just about every other day) he usually returns with something for P. I think at one point in the summer…Papa had bought him 3 life jackets! THREE!!! Not one, not two, but THREE! Get my point?

So Papa’s latest and greatest idea?….You got it…a mechanical John Deere Pull Tractor. He hasn’t officially made the purchase yet, and actually, he claims he is going to wait until P’s birthday (July). However, he has been talking about this tractor for the last few days nonstop…and if any of you know Papa…he won’t be able to wait 7 more months to buy it! Hey dad, I’ll bet money on it. Deal? I guarantee the second he takes P to see it…it will be in their cart and magically in the back of the truck. Who’s with me?

Side note: As I was typing this blog post I was explaining to P that I was writing a story about Papa. He insisted on sitting on my lap and typing Papa his own message. Here is what he came up with:

If I had to translate…I am betting it says something like “Papa, let’s go buy it NOW! And can I get the mechanical Corvette while we’re at it?”