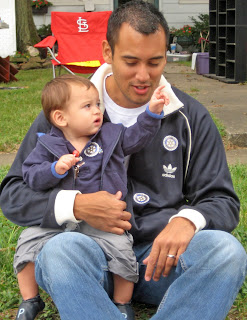 It’s Free Fair time in the Ville so we couldn’t pass up the opportunity to take P to the annual free fair parade. Honestly, I haven’t been to the parade since I graduated HS, but now that I have a child, it’s something fun to do as a family. He seemed to like the parade a whole lot better than he liked the rides. 🙂 A friend of mine, Jodi lives right on Division (her parents) so we decided to watch the parade from there. An ideal spot for the free fair parade! Her little boy (Mason) is a few months older than P and it’s always fun to get the boys together.

Here’s a good shot of him picking up some candy. I didn’t think he would be interested in the candy much, but I was wrong, I had to chase him out of the street! 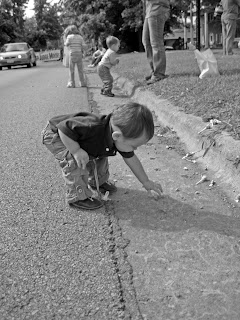 Parker and Mason are sharing their candy…too cute! 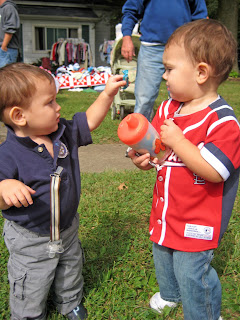 This is what he was doing as the band was walking by…clapping. At 13 months, he’s pretty dang smart! 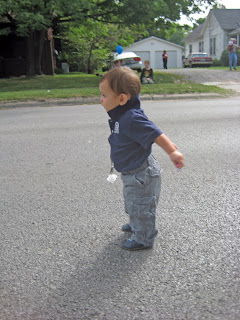 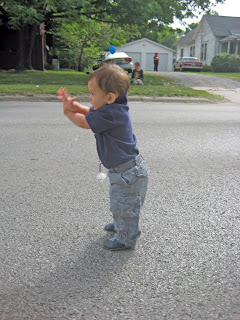 I didn’t enter P in the Free Fair baby contest like I did last year. You know, last year he won his age category and got a glorious trophy (yay!). You would think they would give scholarships or gift certificates or…something…but nope, here in the ville they give tiny little trophy’s and the honor of knowing your child is the cutest kid for his age group. I guess that explains why I didn’t enter him this year. Plus, I get way to competitive! Last year I got so nervous and I was telling J I was gonna be SO TICKED if he didn’t win. At first J thought I was taking it too seriously and then he started acting the same way! haha! Too stressful for me! And he won last year so I figured we’d stop while we were ahead. I did find out that Jodi’s little boy Mason won their age category this year so that was pretty exciting!! YAY MASON! Atleast someone cute took home the trophy and represented age 12 to 18 months with style. 🙂

All this talk of last year’s contest made me bust out P’s trophy pic from last year! He was only 7 weeks in this picture (and he had no neck)! 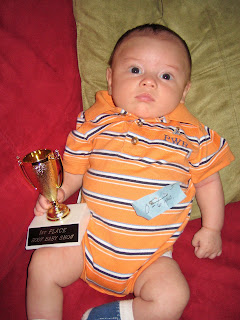