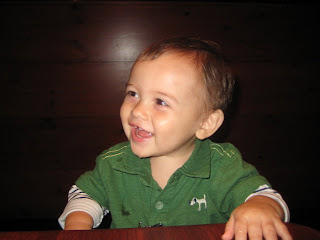 Ummm…yea…so I have I mentioned yet that my child is WILD? He is GO GO GO all day long and everyday he keeps becoming more crazy! I’m not sure how my mom stays sane all day with him. I guess Grandma’s are better at tolerating wildness than mommy’s. I really shouldn’t classify him as crazy or even wild…I should classify him as a typical 13 month old boy. And I really don’t have any other children to compare him to, so in retrospect he could actually be calm…but in my eyes…he’s wild. Hard to imagine he could be so wild with that sweet lil innocent face above huh?! So deceiving!

Since I have Friday’s off we usually always find something to do to get out of the house. This past Friday it was a trip to the mall so he could ride the mechanical toys. I know he hated the fair rides people…but trust me…he loves the mall rides. And now…he is getting VERY vocal when he rides them. These two pictures portray that pretty well I think. He is riding the space ship, his favorite one. He must have been talking “martian” here because I have no clue what he is yelling. But he was definitely YELLING…loud enough so that everyone in the food court could hear. 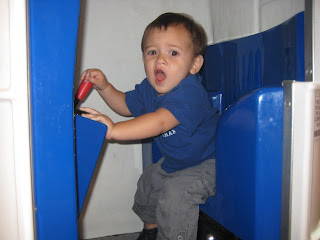 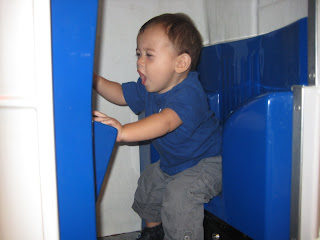 And then there’s our family trip to Houlihan’s Friday night. Wow…I think there were 5 different occasions during dinner when I asked myself, “do I really want 2 of these little devils?” He was in to EVERYTHING! From the silverware to the napkins to the salt & pepper shakers (as seen below) to the drink menu…and ANYTHING else he could lay his hands on. He lasted in the highchair just long enough for him to get bored with it before our food came. Maybe that’s why I don’t need to workout anymore…the second I sit down to eat…he is ready to PLAY! I guess it could have been worse, he could have been screaming at the top of his lungs like he was when he was riding the spaceship or he could have been running all over the restaurant (like some mommy’s let their children do). Maybe emptying half the salt shaker on daddy’s pants wasn’t half as bad as it could have been right? Dear lord, does it get any easier? I think not! 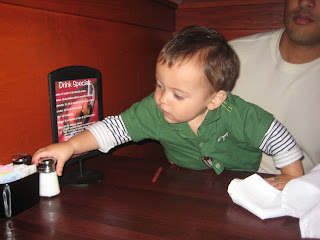 Oh and I forgot to mention…he is now officially a dare devil. He climbs up on the fireplace…just to jump off. I have tried to stop him a million times, but even after a few good falls, he seems to think this is as fun as riding the mechanical toys at the mall. There comes a point in a mother’s life when you say “oh, just go ahead…as long as it’s keeping you occupied”. I say that now, until next week when he jumps off and breaks his leg! Let’s pray that’s not my next post. 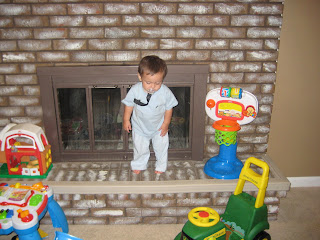 This pic below usually reflects how J and I are feeling at the end of each night! And sometimes, we are so tired we can’t even make it to the bed before we shut our eyes! Kinda funny…because I should probably mention that I took this picture at about 7:00PM. 🙂 And, when I woke him up to go to the bedroom, I caught him drooling on the pillow! (SHHHH! He’ll kill me for posting that) 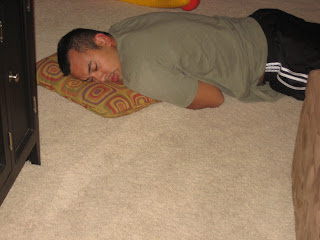